Preventing and treating soil erosion must be the primary focus for any land tender, land owner, community or society. When we neglect soil loss for any myriad reasons (short term economic gain, apathy, ignorance, etc.), we jeopardize the possibility for future generations to cultivate and nourish themselves. As ecological land designers, we are trained to see the characteristics of degraded land and to provide treatments to rehabilitate and reinvigorate it.

Soil Erosion is No Joke

Land and environmental degradation is the number one cause of life migration. When food no longer grows on land, life moves on. Humans are no different, yet our short historical attention span has shown us to forget this pattern. I highly recommend reading Dirt: The Erosion of Civilizations by David Montgomery to learn more about the importance of protecting soil (or watch his lecture below). 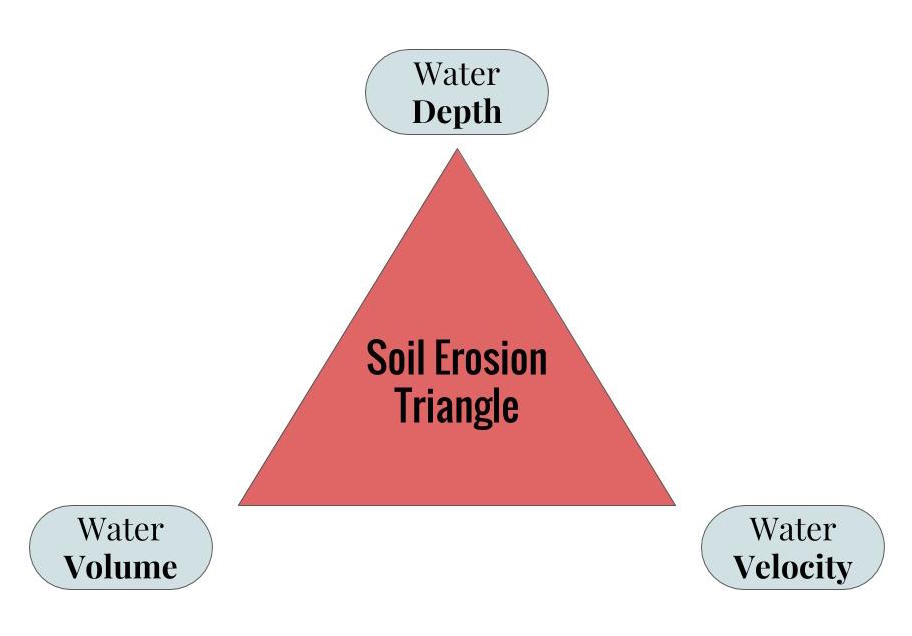 Losing soil is insidious. Outside of catastrophic landslides or massive storm events, soil loss occurs grain by grain. Whether wind, rain or mechanical disturbance, particles of soil move from high to low. It can happen so slowly that it takes one human's life to start noticing a difference. Soil development takes anywhere from 500-1000 years to "grow" one-inch of topsoil. Can we afford to lose 20 to 40 generations of soil accumulation in one lifetime of poor management? While a natural phenomenon, the process of soil loss must be stewarded towards a trajectory of increasing soil. Why? Because our food production, and societal stability, depends on it.

In 2015, Ecology Artisans was hired by members of the Meadowview HOA for a preliminary site assessment of a 390-acre open space preserve in a suburban area of Temecula, CA in Riverside County. Our task was to examine existing and historical soil erosion conditions and prescribe treatment options.

Unfortunately, much of this was kickstarted by the loss of a child's life while he played around unstable stream banks. The HOA also mentioned that plant and animal biodiversity had diminished, as well as trail stabilization and safety issues were arising. Our initial assessment noted that weed and fire abatement practices, in addition to concentrated storm runoff from the surrounding house and infrastructure development, was exacerbating soil loss in the open space areas. In addition, placement of trails, culvert construction and unauthorized encroachment/use has also contributed to the unzipping of the landscape. Scars of historical management of the open space were clearly visible. Deep discing furrows are visible all across the landscape, many of while run up and down slopes, furthering soil loss. Thankfully, discing ended about 10-years prior, followed by mowing. Due to costs, and damage, associated with mowing, the HOA experimented with sheep grazing to manage the land. This would have been beneficial, but the herd stocking and management seems to have been too many and for too long given the standing forage. In Summer 2016, we were brought on for a more thorough analysis and treatment identification for the site. Neil Bertrando and I set out to document the property to identify where soil erosion control was occurring and propose various treatments to stave off the loss and encourage soil retention, water infiltration and plant recruitment.

Examples of Soil Erosion at Meadowview and Potential Treatments

The following examples of soil erosion are a snapshot of the conditions at the site. We've documented over 400 treatment areas needing attention, some with simple, low-cost methods, others with treatments of $3000-acre and up. Our aim is to find treatments that utilize local resources, respect budget constraints, and provide tangible results. We've recently started testing treatments over a various landforms and look forward to tracking the progress of various treatments. 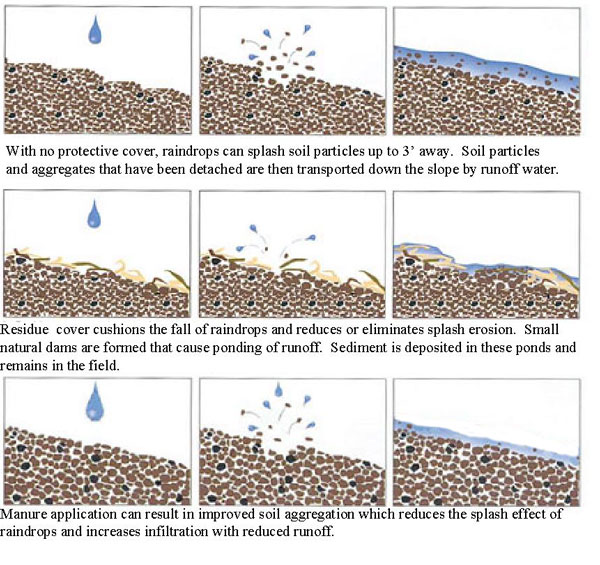 Rain is Great, Except When it's on Bare Soil

According to some, raindrops are soil's greatest enemy. A raindrop cruising from altitude may not feel like much to us, but to bare soil it's a micro explosion. This micro explosion creates a splash effect. Soil particles are launched into the air, become suspended in water and thus begins the erosion process. Without vegetative cover, these soil particles are now carried by overland sheetflow and follow water until the rains cease; it is trapped by a physical structure; or gravity no longer tugs it downhill. Multiplied by trillions of raindrops and a site becomes impacted very quickly. 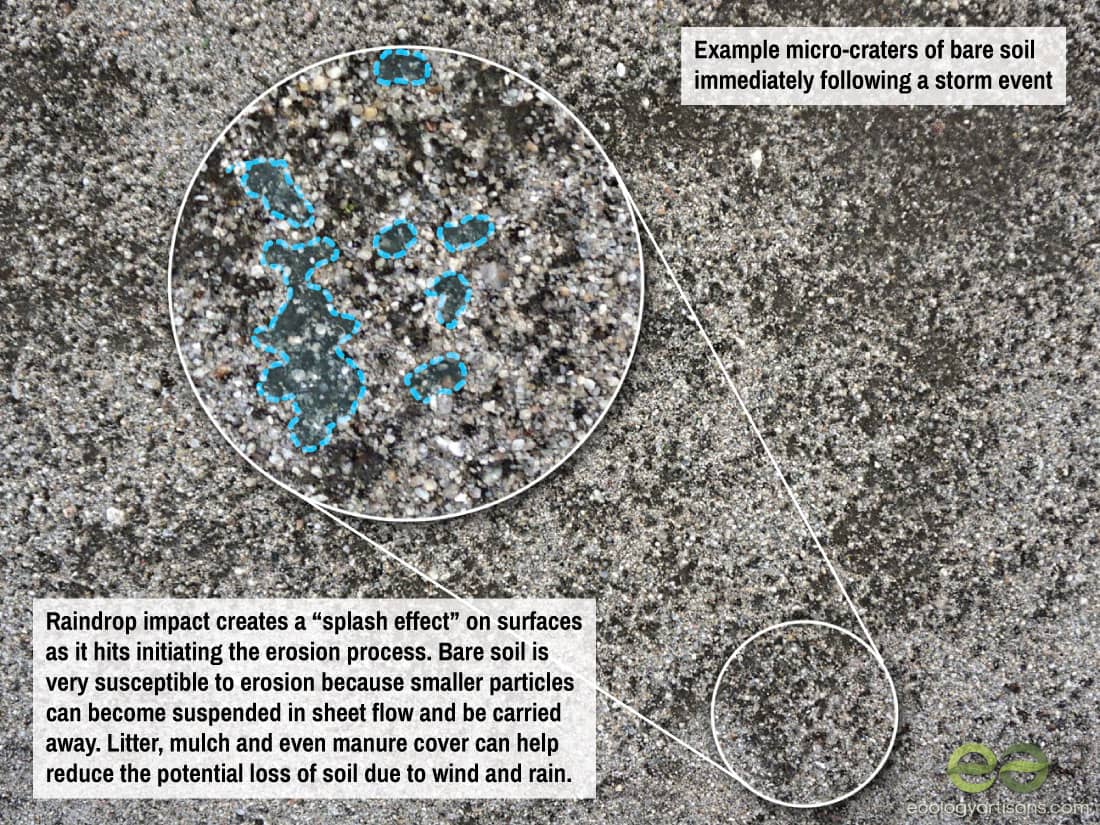 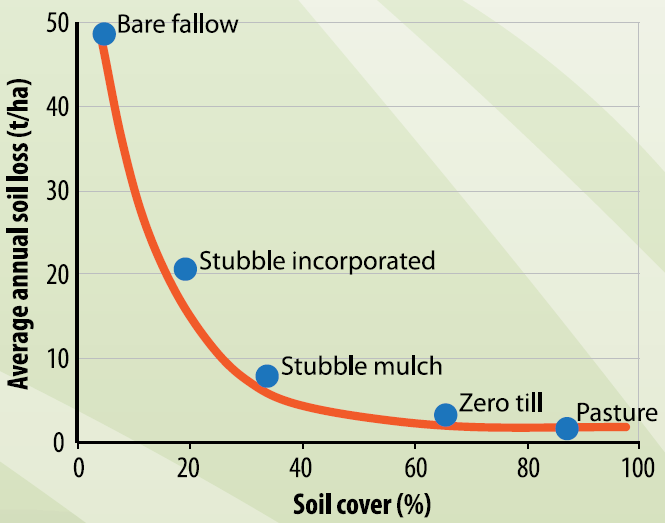 Litter cover, or vegetative cover, functions as a protective blanket that reduces the explosive force of raindrops. It also covers soil and protects from scouring winds as well as slowing overland sheet flow. Litter cover (depending on soil types, slopes and environmental conditions) is best when it's covering 50% or more of bare soil. The graph to the right shows how increased litter cover (or in their verbiage "stubble") quickly reduces the tonnes/hectare of soil loss that can occur when soil is exposed. Over grazing through improper stocking rates, selective grazing, excessive mechanical vegetation removal or devastating fires can all leave soil vulnerable to erosion. 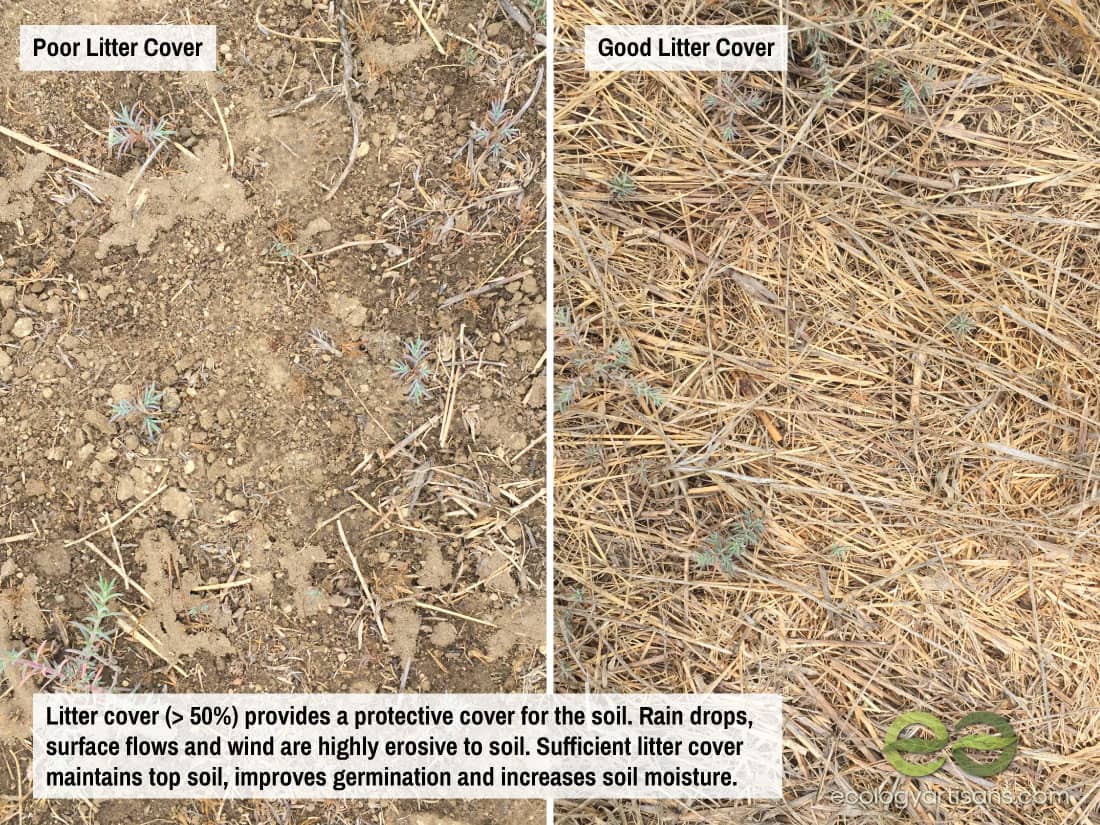 While invasives like rip-gut brome and Russian thistle are unwanted, in areas lacking vegetative cover they are valuable resources to manage for improving litter cover.

Ignore Gravity and Suffer the Consequences

"Water always seeks its own level" is a mantra we repeat to ourselves often. What it means is water always establishes a level surface if contained. When it is not contained, say by a bowl or a dam, it flows until a structure stops and retains it. Knowing this is crucial when designing landscapes and their use. Historic weed and fire abatement on the Meadowview site was conducted using discing. Traditionally used to break up clods following plowing, discing was used as a quick way to cover large acreage. Unfortunately, due to ease of access and lack of knowledge, many areas across the site were disced vertically down slopes which allows water to channel and concentrate. This concentration speeds up the process of soil erosion and land degradation and limits the landscape's ability to infiltrate water. 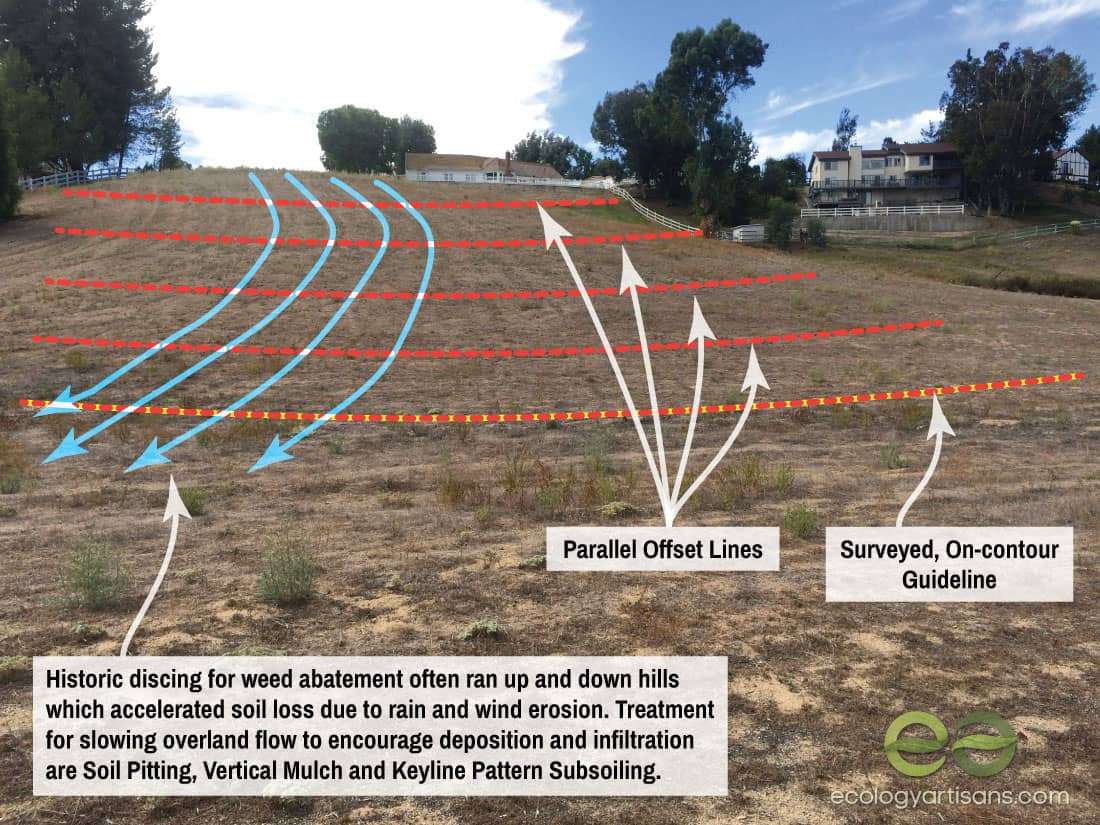 Vertical disc lines are seen on this hillside. Interrupting these lines with on-contour subsoiling should disrupt current soil erosion conditions.

Using this same premise one can encourage water to stay on site longer by slowing, spreading and sinking it. Subsoiling using a Keyline plow or other no-till plow and placed on a slight off-contour grade from valley to ridge is just one technique. We can spread moisture accumulation in valleys and direct water out towards the ridges to more evenly distribute moisture and lessen the hyper dry and hyper wet conditions normally seen. 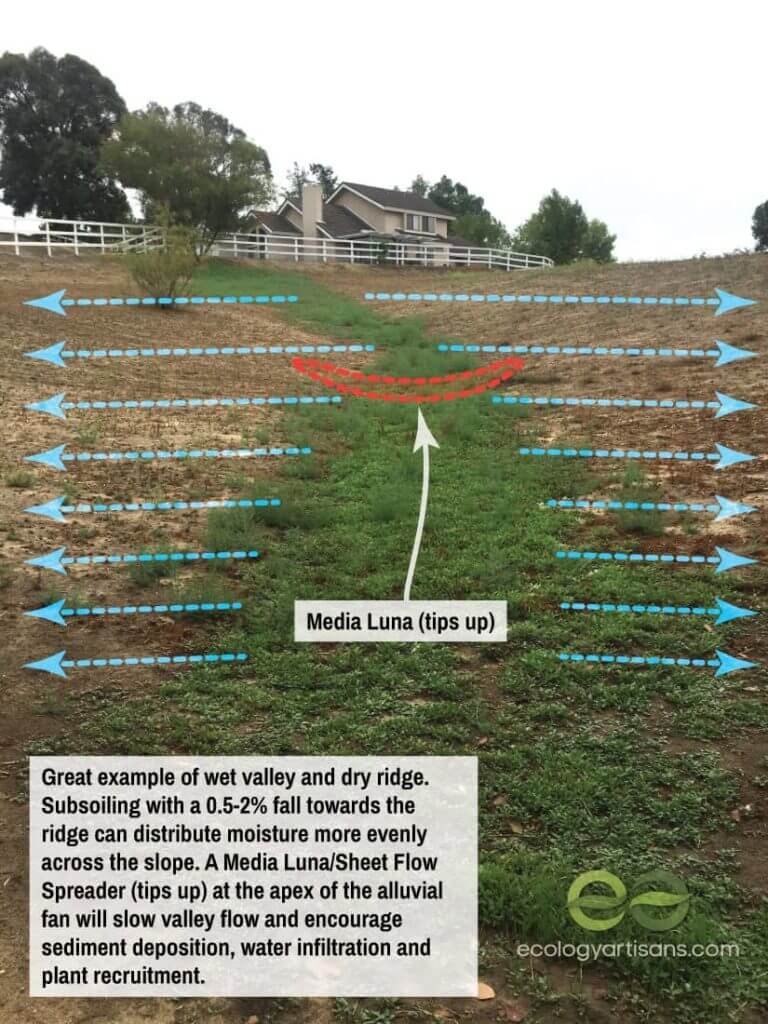 Encouraging water to move from wet valleys to dry ridges is on technique to share abundance with rainfall.

Just How Much Soil is Being Lost?

Without historical documentation of previous soil elevations, we'd be hard pressed to discern just how much soil has been lost since the active management of the open space began. Thankfully, we have indicators in the landscape that bear witness to where soil levels used to be. Fixed objects like fence posts, trees or lamp posts can all show us how much soil is gone. The post below is located in a relatively flat and low-use zone, yet still shows a roughly 1.5" loss of soil! Multiply that across 390 acres and you end up with 46,718 tons of soil lost, perhaps more. 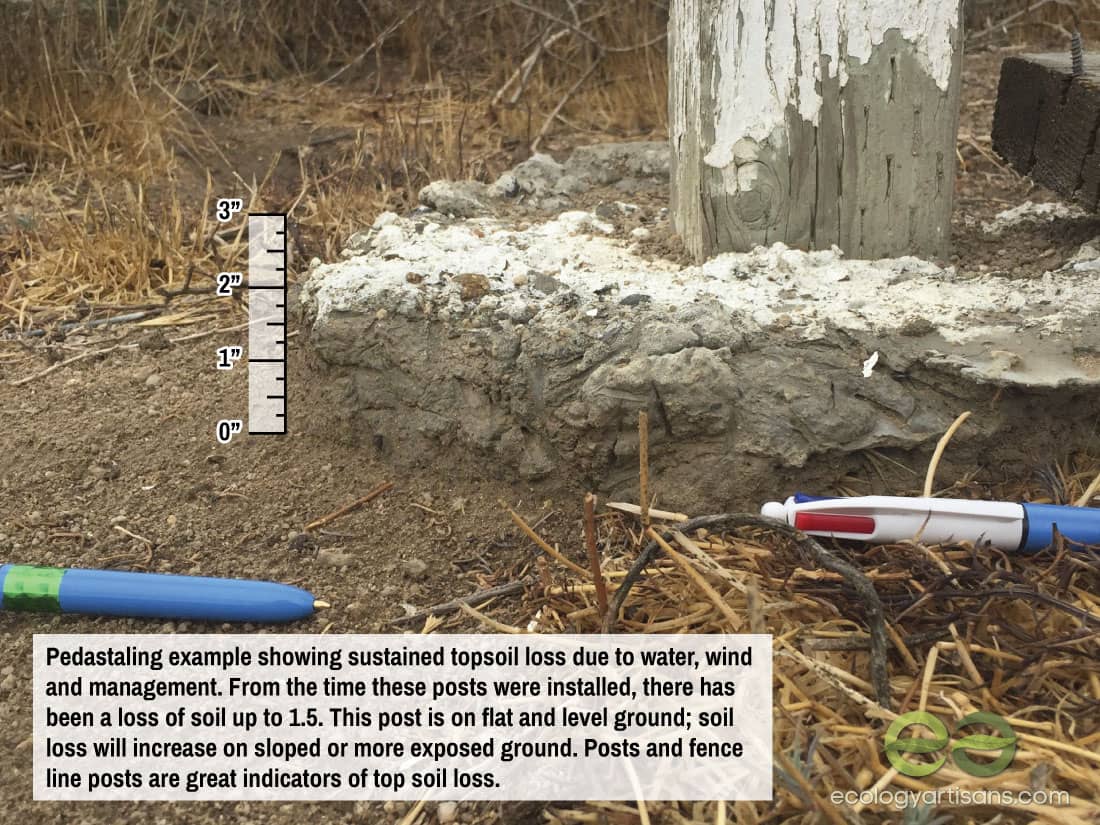 Fence posts and other fixed structures can be great indicators of soil loss in a landscape.

Soil loss not only happens on top of the surface, but in channels as well. Many of our human developments have behaved in a hydrophobic manner, shunting all rainfall towards concrete culverts and drainages that link up to existing natural drainages. This is fine, so long as the new volumes of water being directed into these channels is calculated and proper structures are built to accommodate them. Unfortunately, many developers in the past have not taken these calculations into account and leave their future residents with erosion concerns. Streams and channels that traditionally accommodated low flow events are now forced to accept much larger volumes. Unable to handle the larger flows, drainages and channels often downcut then widen and carve out a new meander pattern at a new lower dynamic equilibrium. This downcut channel system can encroach on personal property with damaging effects. 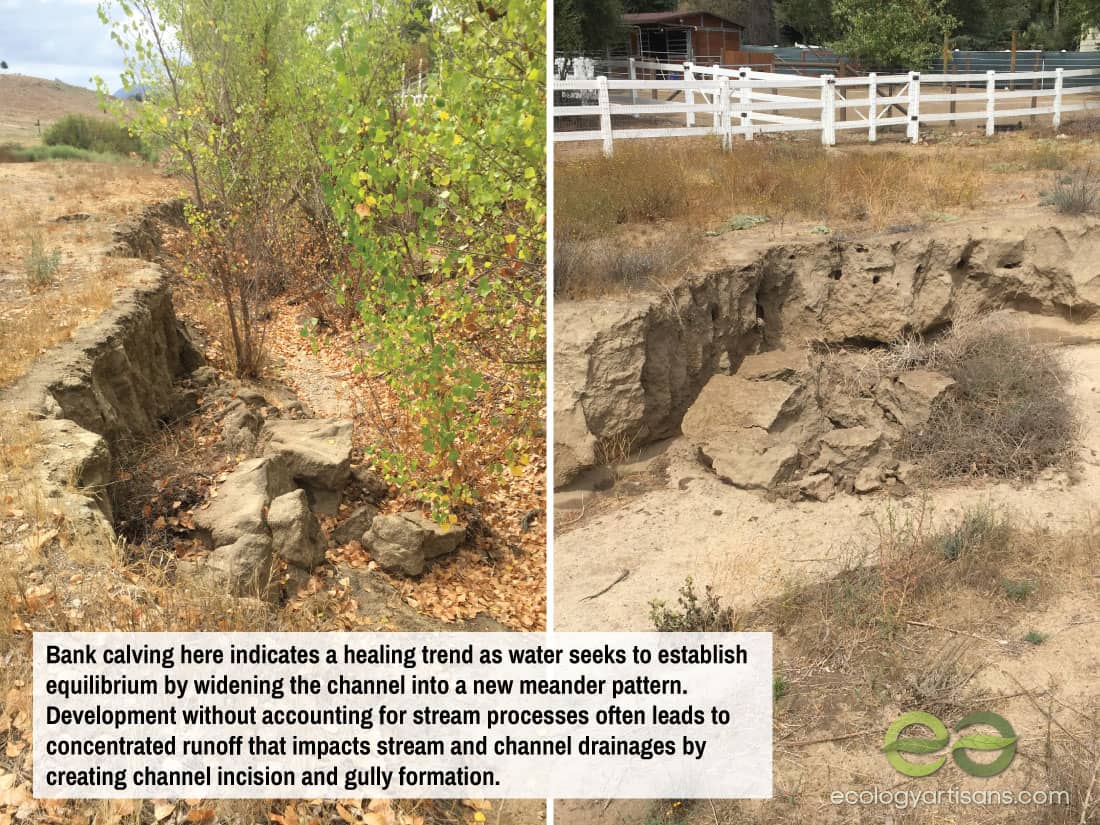 Additional water flow into channels also scour channel beds which lead to headcuts that propagate upstream. As the headcut migrates upstream, the force of the water in the pour over erodes the channel bed further. This cycle allows the headcut to move upstream which disrupts meander patterns and causes a compressed, straightened flow for the water. This narrowing of the channel increases its potential for erosion and the cycle repeats until equilibrium is established or the channel is starved for water. 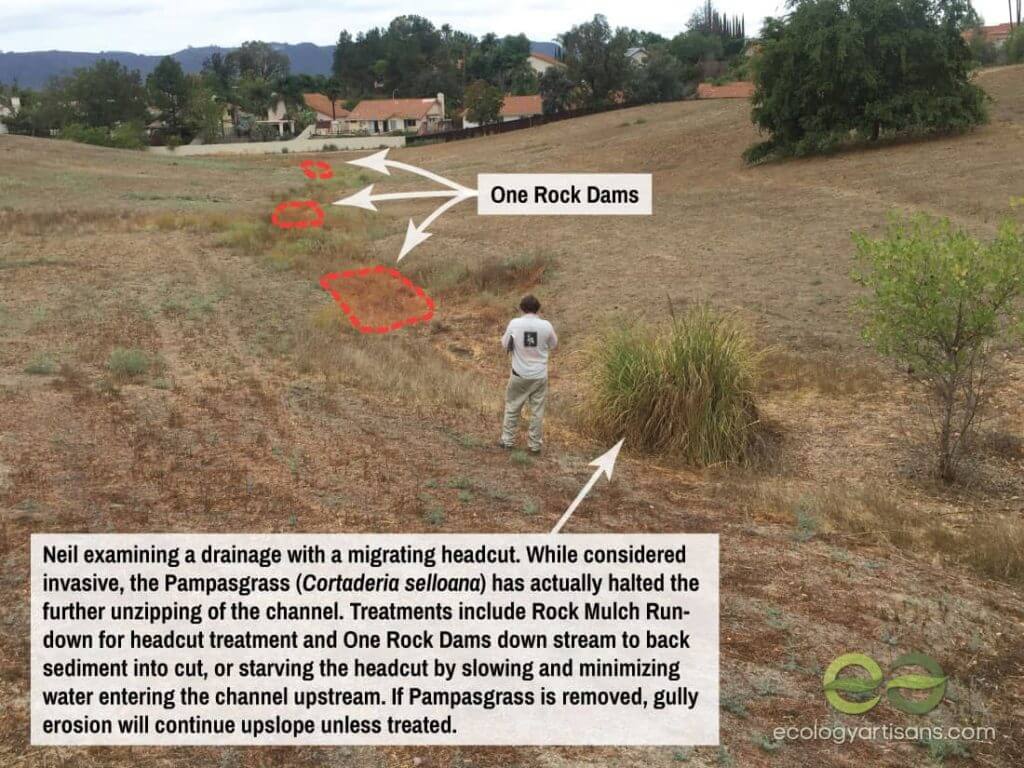 One Rock Dams for Channels and Streams

A simple treatment grade control structure for slowing water is the One Rock Dam (ORD), developed by Bill Zeedyk. This is a low lying rock or other non-erosive material laid in the crossover or meander crossover section of a channel. The crossover is the section least susceptible to soil erosion as water moves through the channel. If placed in a bend, the strong erosion forces in the pool will compromise its stability and lead to failure. Built with a footer/splash apron and seeded prior to laying in the rocks, these structures slow water flow and encourage sediment deposition. Usually built downstream of a Rock Mulch Rundown (RMD), an ORD allows sediment to rebuild the channel bed and avoid further headcutting. As sediment builds, some channels can accept a new layer of rock, thereby progressively rebuilding the streambed. 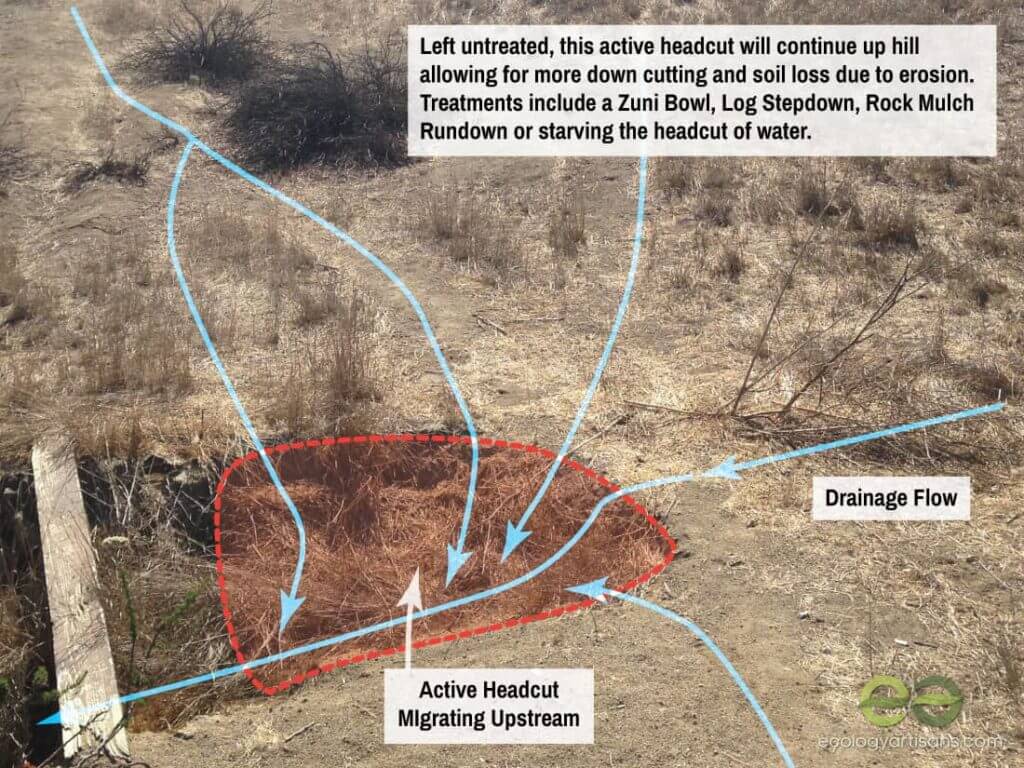 This active headcut is migrating uphill and will continue until starved of water or properly treated.

Given Meadowviews' lack of local rock, we experimented with soilcrete burlap bags. We mixed 10 parts native earth on-site to one part concrete. Never source from the channel bottom since we're trying to build the channel bed up! Instead, source soil from steep banks by laying them back to a gentler angle and use that soil as your earth source. You may get away with mixing your bags dry and hoping for rain, but it's best to mix dry, install and then immediately soak the structure to get the cement to cure. Always use fresh cement to ensure the bags harden, and seed under your rocks/bags before placing them. Also, test you own ratios to ensure you end up with a solid block that will resist eroding. 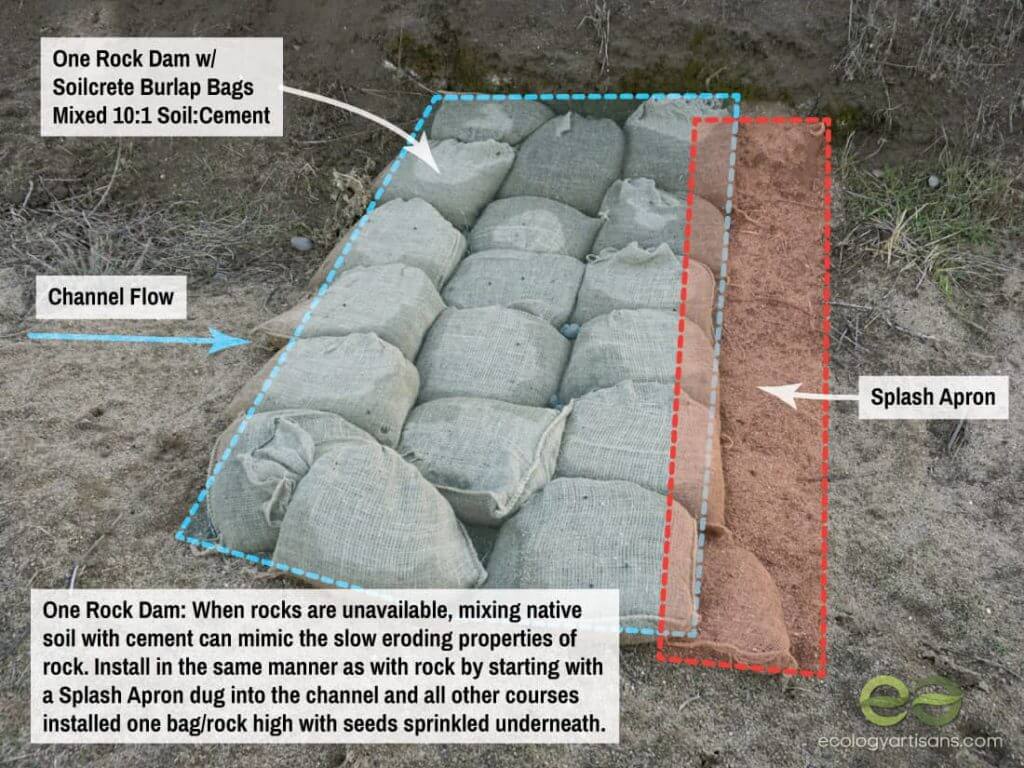 A Rock Mulch Rundown (RMD) helps control the flow of water across a grade change. Originally designed by Craig Sponholtz, an RMD is traditionally used to repair headcuts in low-flow conditions. A headcut is laid back to a 3:1 slope, soil is compacted, seeds are spread, and the slope is covered by rock mulch with a Splash Apron installed at the toe to prevent undercutting. Over time, precipitation will spur the growth of the seedlings and they will add additional erosion control to the soil as they take root. This is only used in low-energy headcuts. 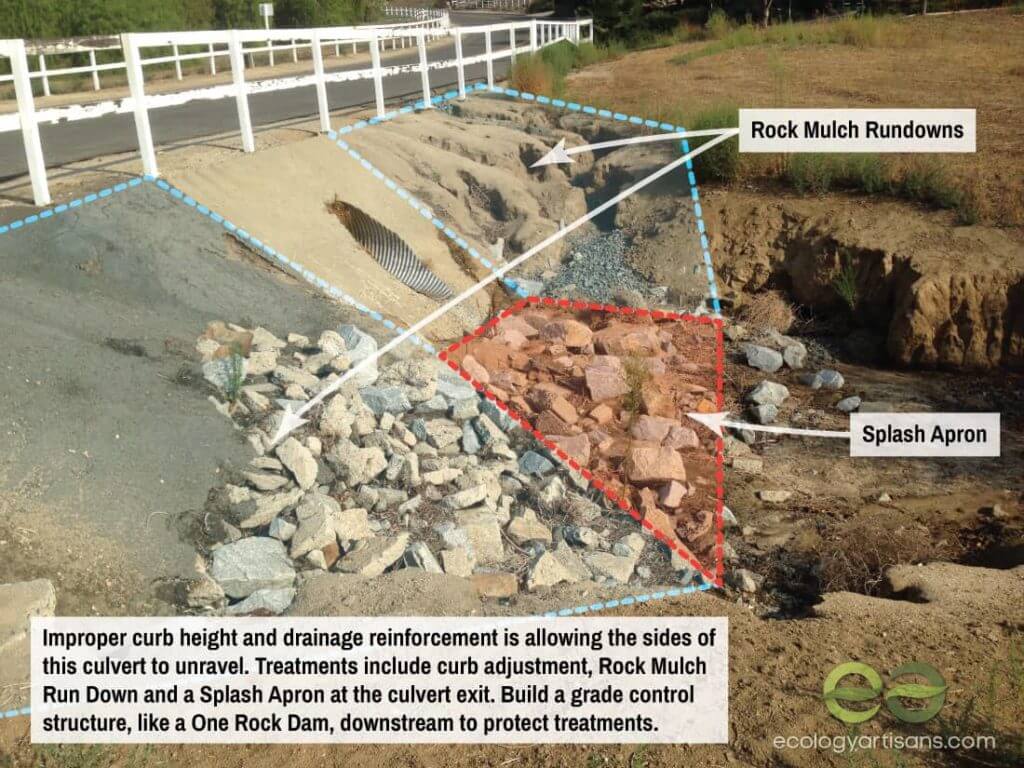 This culvert could use two Rock Mulch Rundowns and a Splash Apron at the culvert mouth.

Other good alternatives for headcut treatment are Zuni Bowls (aka Stabilized Plunge Pool) or Log Stepdowns.

We will be tracking the progress of the Meadowview HOA Open Space and its soil erosion issues as the seasons progress. If you live in Meadowview, or are interested in attending a volunteer day to further rehabilitate this rare parcel of open space in Temecula, please contact the Meadowview HOA for more information.