A Transitional Strategy Out of Avocados and Citrus 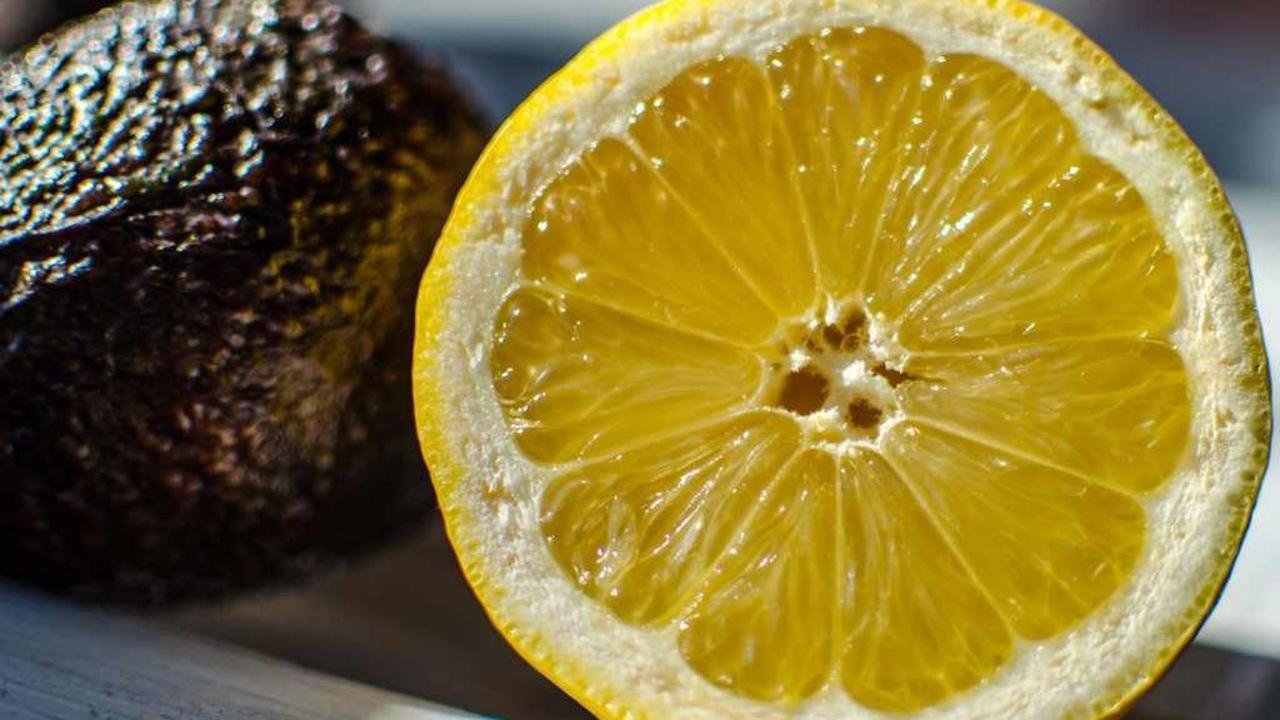 Avocados and Citrus have long been mainstays of the agricultural economy here in San Diego County. With the California drought stretching into its fifth year (this El Niño looks to finally release us of that stretch, thankfully), many of the farmers that rely on these crops for their main cash flow are struggling. Farms are removing and stumping thousand of acres of avocados and oranges all over the county. While they grow well here with adequate water and fertilizer, maybe Avocados and Citrus were not the best crops to plant in San Diego in the first place. Our Mediterranean-style climate, with it's cyclical drought cycles, has challenged anyone making their living or subsisting from the land in Southern California.

History of Avocados in San Diego

“The first avocado trees were brought to the state in 1871”, according to Jack Shepard, who worked in the business 44 years and is a past president of Calavo California Avocado co-op, the state's largest avocado growers co-op. 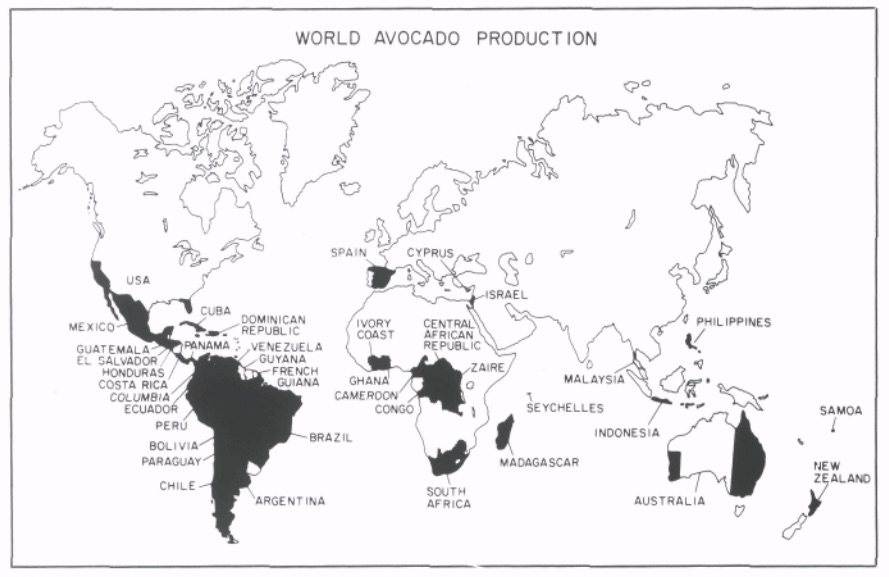 According to Warren Currier, spokesman for the Avocado Growers Assn. About 60% (35,000) acres of the state's avocado groves are centered in the North County area, many of those coming from the unincorporated city of Fallbrook. California produces almost 95% of all US grown avocados. Other production zones for avocados are Central and South America (where they originally hail from), Africa, and other tropical and subtropical locations in Southeast Asia and Australia. Tropical areas of Mexico provided the first varieties of avocados. Although San Diego does have a favorable weather and mild winters, the region's long, dry summers do not match the larger rainfall amounts of its point of origin. Avocado genetics need more water than is naturally available here in the county, so supplemental water is essential to keep them alive and productive.

History of Citrus in San Diego

California citrus got its first start in Los Angeles in the 1840s during the Gold Rush days. Prized for its Vitamin C content and ability to combat scurvy, citrus was in high demand in Northern California where miners sought fame and fortune. Native to subtropical China, Citrus trees suffer from the same challenges that avocados face here in Southern California. Breeding efforts in the county to select more drought tolerant varieties have been few and far between. This is understandable, given the old paradigm surrounding water (cheap, infinitely replenishable, and mine!), so no pressures existed to find drought tolerant varieties. Also, there is substantial risk and delay in growing new fruit from seed since it's genetically independent from the mother plant. If growers could be compensated from taking the risk to find delicious, drought tolerant varieties, we might already have citrus that can survive well with less water. Same goes for avocados and any other species of plant. Selecting for local adaptations is essential, worldwide, if we want resiliency and local independence in a world of global reliance and risk.

Any new strategy we adopt, the underlying ethic and theme needs to be a collaboration with nature, rather than domination or ignoring her regional patterns and behaviors. By actively selecting for new, adapted genetics, and utilizing water wise planting strategies that mimic nature's most efficient patterns in response to the Mediterranean biome we live in, we may be able to continue to grow avocados and citrus without the environmental and production costs that continue to rise. Tree crops are excellent sources of fat, protein, and carbohydrates. Given their perennial nature, they also help retain and build soil, the backbone of healthy agriculture, compared to annual crops like corn, wheat, soy, etc. The Avocado is an excellent tree crop for its very healthy fats, and could continue to contribute its benefits via the selection of more regionally appropriate varieties. San Diego County appropriate tree crops include: olives, grapes, chestnuts, hazelnuts, oaks, mesquites, walnuts, almonds, mulberries, carobs, and apples. Most of these tree crops have Mediterranean biome adaptations or drought tolerant genetics. The olive is very drought tolerant and provides a tremendous source of fat. Oaks produce acorns, a carbohydrate-rich meal which were the staple food crop of the indigenous Kumeyaay and other tribes throughout California. Acorn flour and acorn oil are viable products from the mighty oak. Imagine dipping a gluten-free, mineral-dense, acorn cracker into your salsa instead of a GMO corn chip at the next Sunday football game? Chestnuts and Hazelnuts are additional Mediterranean tree crops that provide nutrient rich seeds. Bonus? They also can live for hundreds, if not thousands, of years. Talk about resiliency and seven generations. 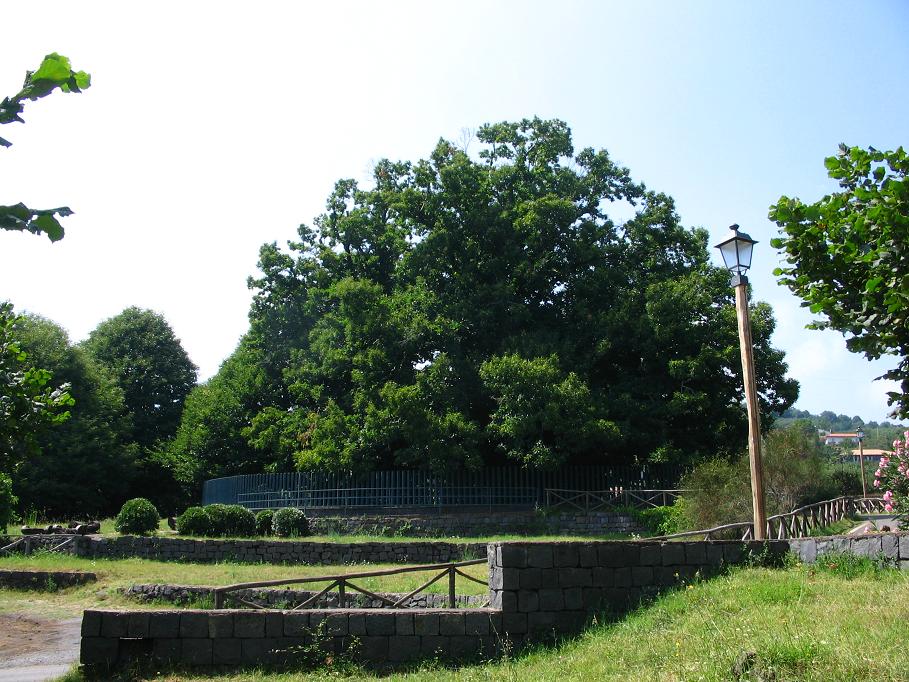 This past summer, I spent some time in Sicily in the Mediterranean, where I visited il Castagno dei Cento Cavalli (the Hundred Horse Chestnut Tree). This tree is over 3-thousand years old and continues to produce chestnuts. The Italians have eaten the chestnut for thousands of years as well making items like chestnut flour pasta, pancakes, and bread. Combining these Mediterranean tree crops with appropriate water harvesting and management, and holistic farm planning techniques, such as Keyline, we can improve the resiliency of our farms. The last key element to this new transition strategy is appropriately re-integrating animals back into the landscape. San Diego's valleys used to be filled with livestock, much of it mismanaged due to continuous selective grazing. Pastures were left denuded, native plants died off due to competition from exotics, and soils were washed away or baked in the hot summer heat. Animals fill the nutrient cycling and disturbance patterns that local ecologies depended upon for regeneration and stability. Intentional fire clearing was also a significant part of the disturbance patterns throughout California, managed by indigenous peoples. However, due to fire safety issues, we need to rely on mechanical means of disturbance, such as trampling, browsing, and eating via animals. A useful grazing strategies are Ultra High Density Grazing (UHDG), and Holistic Management or Regenerative Management strategies and techniques for improving our soils and grasslands. These strategies use a variety of techniques that group animals in tight herds and mimic the patterns of large herbivore herds that used to roam San Diego's savannas. By moving the animals constantly, grasses and forbs get a chance to rest, improving their health, keeping soil covered, and increasing the organic content in the soil. By combining multistory agroforestry systems with mob stock grazing techniques, San Diego farmers can begin to make their farms more resilient to climate change, droughts, and other disturbance regimes that are sure to lie ahead, while providing multiple yields which avoids the betting on one cash crop and being at the whim of commodity markets. We look forward to sharing more about these projects and strategies in more detail as we explore and build these systems.